"People need to understand that African-American people do not have human rights in this country," said Dr. Randy Short in a phone interview with Press TV on Saturday as he commented on the death of Eric Garner, a 43-year-old father of six, who died on Thursday after a New York police officer put him in a chokehold.

In a video of the incident, a New York Police Department officer could be seen putting Garner -- who suffered from chronic asthma and diabetes -- into a tight, illegal chokehold. The African-American man tells the cops that he can't breathe before his body goes limp.

The NYPD has a long history of killing unarmed African-Americans and the officers are rarely punished for their actions, according to an analysis by The Huffington Post.

"The impunity of the police killing and murdering African-American people is as old as the Constitution," Dr. Short told Press TV.

July 16 marked the 50th anniversary of the death of 15-year-old black student James Powell who was shot to death by a white police officer in Harlem.

There are tens of other black individuals who were killed by white officers in New York City and according to City Councilman Jumaane D. Williams, "Garner joins a list that every male of more color in New York City knows."

"Across the United States, blacks are terrorized and brutalized," said Dr. Short, stressing that "there's really no hope until people rise and demand their rights."

On this edition of the Face to Face, Press TV conducts an exclusive interview with Randy Short, human rights activist, to discuss the plight of African Americans.

Short says he is opposed to what he calls the Anglo-American apartheid system present in the United States. He further added that this situation has become worse in the last fifty years and adds that a slow genocide of African Americans is taking place in America.

He also talks about the media’s demonization of blacks in America and calls for the autonomy of African-Americans and a referendum similar to the one held in Scotland as the solution.

“The Ku Klux Klan Has Infiltrated Police Forces Across America.”

Press TV has conducted an interview with Randy Short, human rights activist from Washington, about the issue of the Western campaign against Iranian media, which offers facts and alternative views that often runs counter to the story lines fed to Western populations through their mainstream media.

“Psychotropic Drugs Are Being Used By US Cops To Make Them Aggressive!” 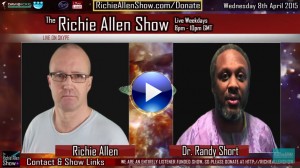 One petitioner wrote: “The lack of spirituality by the staff is something they will have to face eventually. One day they will be put in a situation where they will be hurt emotionally by someone else, so they will feel the same pain they have put Camille through. She is a strong women and will show true leadership to those who are weak minded and insensitive to humanity.”